This how-to introduces you to the audit trail of a particular work item like a case or a process and how to add entries to this trail with the use of the 'Audit' activity, or the Java builder API as well as how you can make use of the audit engine capabilities to build any arbitrary audit stream of your own.

The audit stream is created using audit instances (you might also call them audit entries) being added for whatever reason. Those audit entries are later queried for using some filtering aspects like the scope or type or even user depending on the needs and angles to look into auditing.

In order to understand auditing better, we need to be aware of some concepts within the audit instance and the retrieval of them first.

An audit instance should always be scoped to a context it belongs to. Although the builder API does not explicitly enforce it to be set, it is a good practice to always include a scope to an audit entry. It might even be something like scope type global and any scope ID you like but scoping is usually the key for permissions and filtering, so a very important concept.

There are a couple of predefined scope types you can create audit entries for like cmmn or bpmn for the scope of a case or process, respectively. More scope types include task, conversation, user or user-account.

It does not stop there, you can add your own scope types as well as client or claim or whatever you need to build a stream for later on. Another example might be to save audit entries whenever some important settings are changed like setting some thresholds or escalation settings, changing an SLA and the like. You might want to use scope type settings there, and the scope ID would point to the exact setting which was changed.

When you use the default audit REST endpoint to filter audit entries, there are only a few permission handlers yet available to make sure you only get the entries you are allowed to see, furthermore, the scope always needs to be present for a query, so it is meant to be used for scoped audit streams only using the built-in handlers like for cases, processes and tasks as an example.

When you build your own custom scopes or want to create an audit stream within another context than a single scope, you need to create your own REST endpoint for that by using the Java query API internally.

Note If you create your own REST endpoint to query for audit entries, always think about the permissions of the audit entries! Who is able to see what entry? What permissions do I need to check when querying for audit instances? Otherwise, you might leak classified information to be seen by users not entitled to see such information.

You can optionally also set the scope definition ID to the scoped object model for instance. This way you might later filter for all entries created within a specific type of case model as an example or a particular approval process model.

Beyond the scope you can define the type and sub type for an audit entry. Most likely it is used for later filtering so be careful and think about the requirements for the audit stream you need to query and render to set appropriate type information.

Using an example for approvals, building just an approval audit stream in a dashboard where you want to see everything around approvals, no matter the case or user, just approvals. Then you could set the type to approval and use approved or declined as subtypes for instance.

Note Although the type and subType are custom fields for an audit entry, there are some predefined ones used in the audit view on a case or process like create or complete where if known, another icon is rendered for the entry according the type.

The payload is optional and might contain additional information for the audit entry. You can add an arbitrary number of additional data to the payload, there is no limitation, just keep the overall data you produce through those audit entries in mind.

There are some predefined keys for the payload in order to be rendered in the default audit trail UI of a case or process:

See Audit Task for a description of the attributes associated with an audit task for BPMN process models.

We want to explore the options with the audit service task within a case and see its entry in the default audit trail UI of the case instance at runtime.
Simply create a new case model and add two audit tasks to it:

Here are the sample properties for both audit tasks: 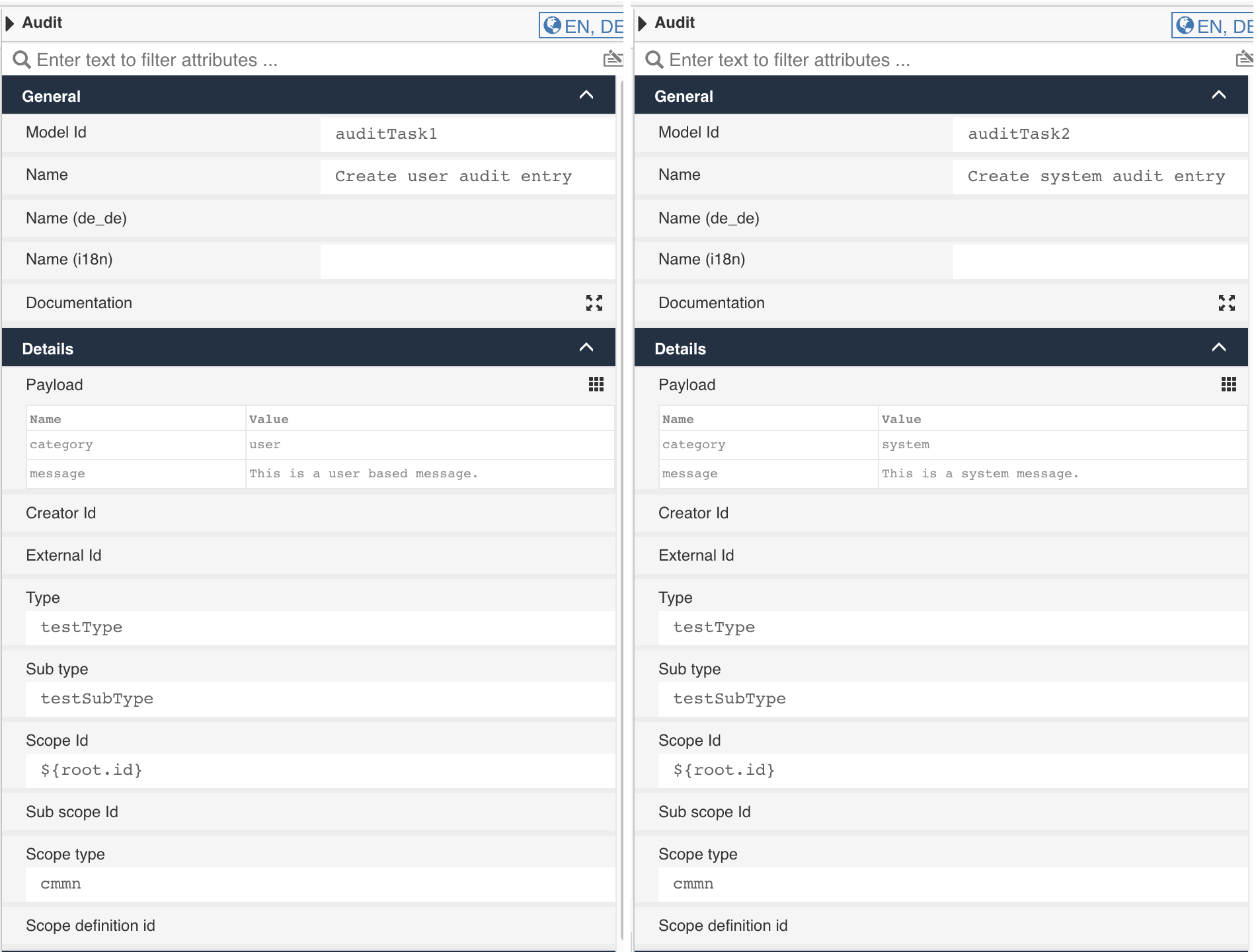 Let's look at them in more detail:

If you deploy the sample app and run such a case, this is how the audit entries get rendered in the default audit trail UI: