In this guide, using the Flowable Service Registry Engine from a modeling perspective is described.

More examples can be found in The Data Object Modeler Guide

After a service model is created (see the Service Registry Engine Developer Guide), it can be used in process or case models. To do so, drag the Service registry task to the canvas from the Flowable design palette:

In the attribute panel, the service and one of its operations can be selected (one service can expose multiple operations):

At runtime, the process or case invokes the service configured in the referenced service definition.

A service operation has zero or more input parameters and zero or more output parameters as part of its definition. These parameters define what kind of data the service expects when invoked and how the result looks like. However, it does not define how this data gets mapped into the process or case. As service definitions get reused between different models, this means that the same service can get and produce data in a different way depending on the parameter mapping.

Suppose that the service operation has one input parameter, the popup would be as follows:

Similarly, for the output parameters:

When no parameters are defined, no mapping is needed.

Input parameters define what kind of data the service expects when it is invoked. Depending on the type of the parameter, the following values are supported in the value column of the input parameter popup:

In the list below, when an expression is mentioned, this expression has access to all variables of the current process instance or case instance. Also the uses of ${parent.var} and ${root.var} are supported.

For an output mapping:

In either case, type coercion (the same as described above for the input mapping) based on the type of the output parameter is applied.

When the 'Save output variables as transient variable' is checked, all output variables are stored as transient (i.e., non-persisted) variables. This is useful when a service returns data that is not needed to be stored in the process or case instance (e.g., the data is only used in a calculation or as input for another service call).

When the 'Output variable name' is filled, no output parameter mapping is applied. The result of the service call is to be stored as-is under the given variable name.

To clarify the descriptions above, let us look at some examples:

Getting a Simple JSON Value

In this example, we are using a REST service that fetches information that we want to store in a process or case instance.

The service definition looks as follows: 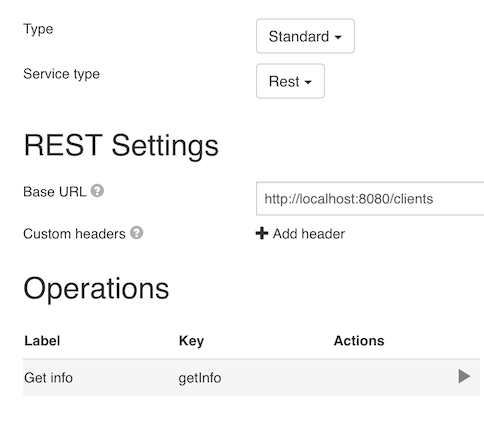 And its one operations:

Note how the input parameter clientId is used as part of the URL for this operation.

Also, note that we are only returning a handful of the available properties. Not having the other properties (e.g., creditScore) in the output parameter list filters those out.

We can now create a simple process that uses that service:

Assuming the process model has a start form with clientId, the parameter mapping looks as follows: 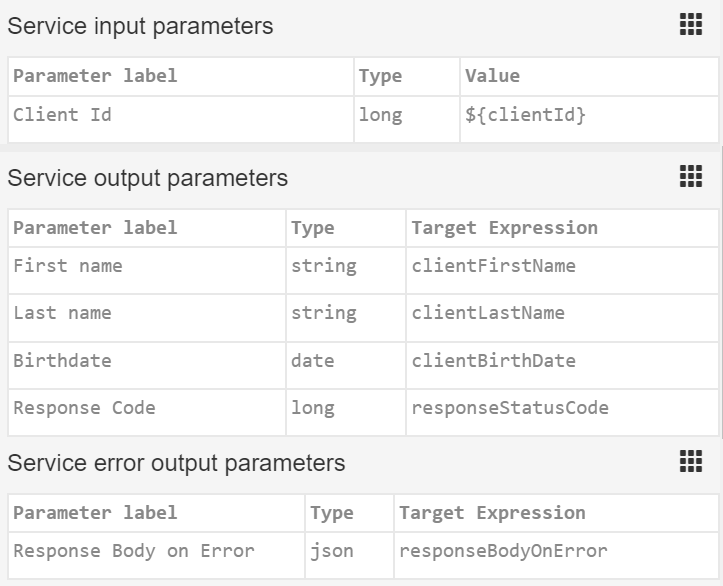 Here we are mapping the value of the clientId from the start form to the single input parameter and the first name, last name, and birthDate are mapped to specific output variables. If this process was part of a case, we could push the variables upwards using ${root.clientFirstName} or ${parent.clientFirstName}.

If we run this process say in Flowable Work, the user task after starting the process instance now shows something like this, which validates that the service was invoked and variables were passed back and forth correctly. 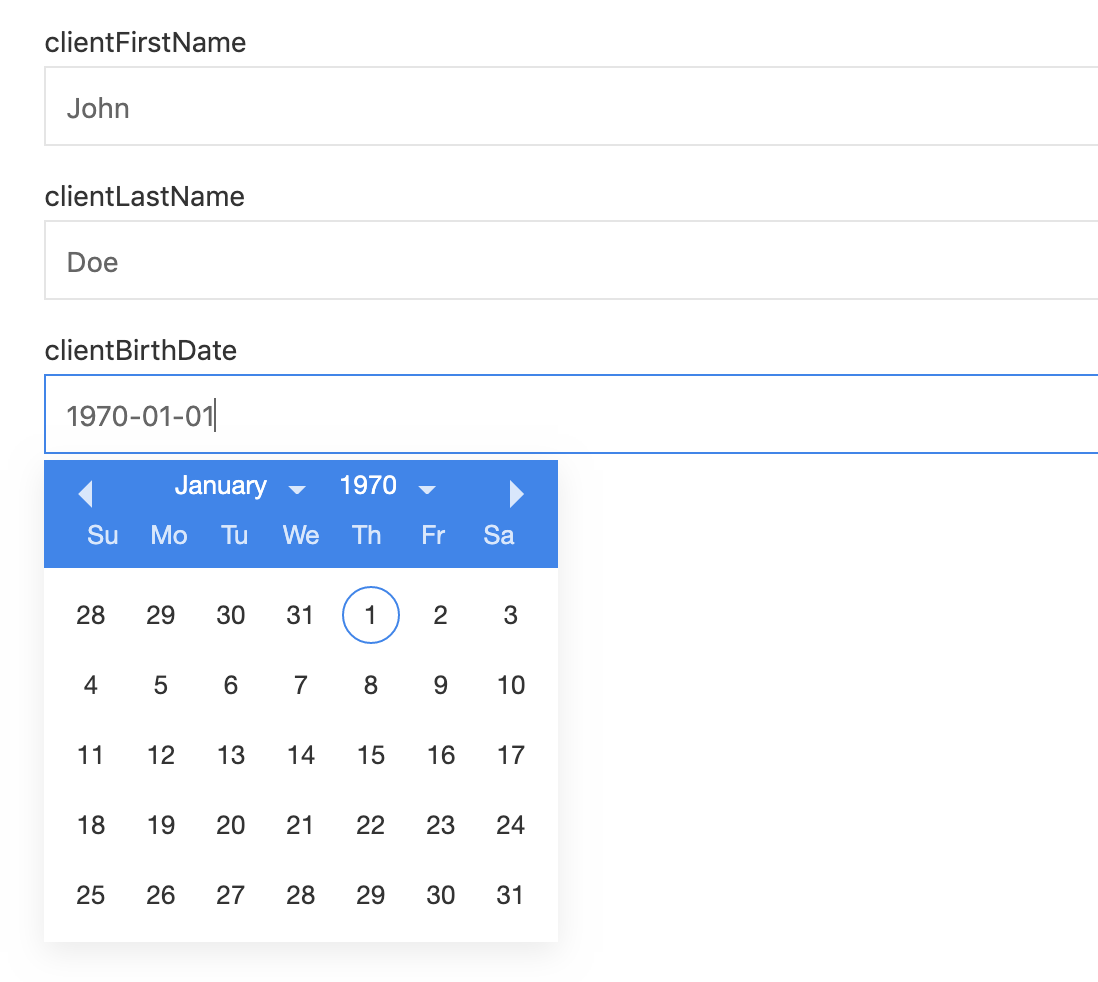 Using Paths to get a Nested Value

Let us adapt the example in the previous section to include nested fields in the response. For example, the firstName and lastName are under the info field and the birthDate is further nested under the dateInfo property:

And for the birthDate parameter: 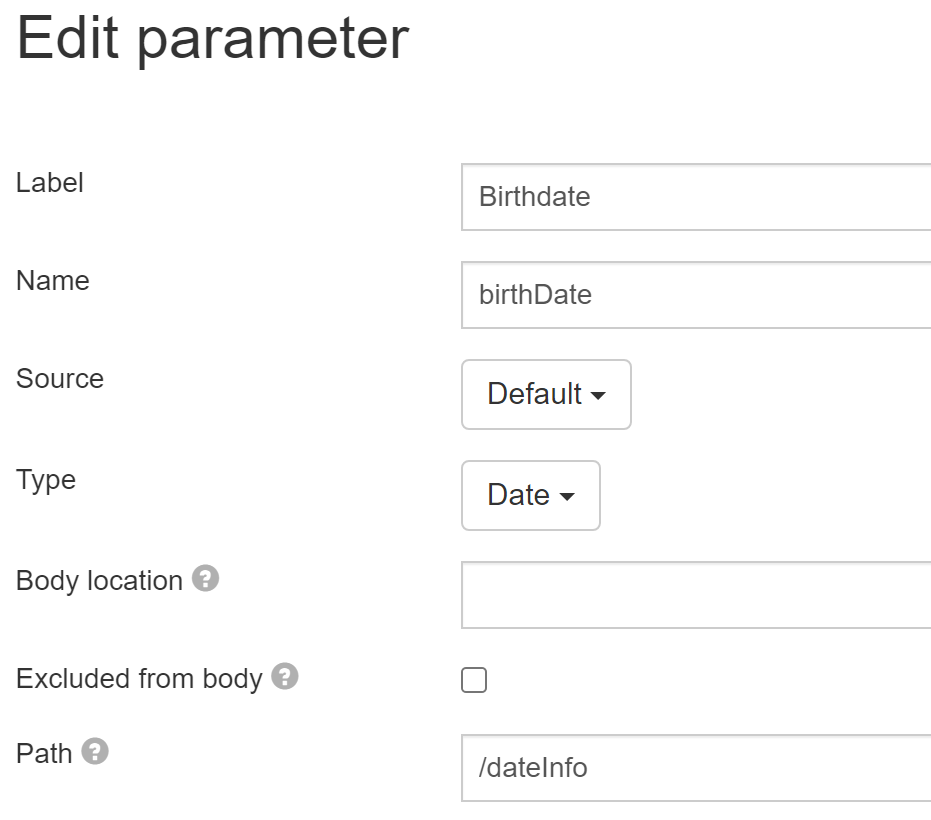 In this example, we have a REST endpoint that returns an array of clients:

Again reusing the service definition from the previous example, we now add a new operation. This operation is a simple one, as the base URL is already set and we only need to map the output (a JSON array) to a list. 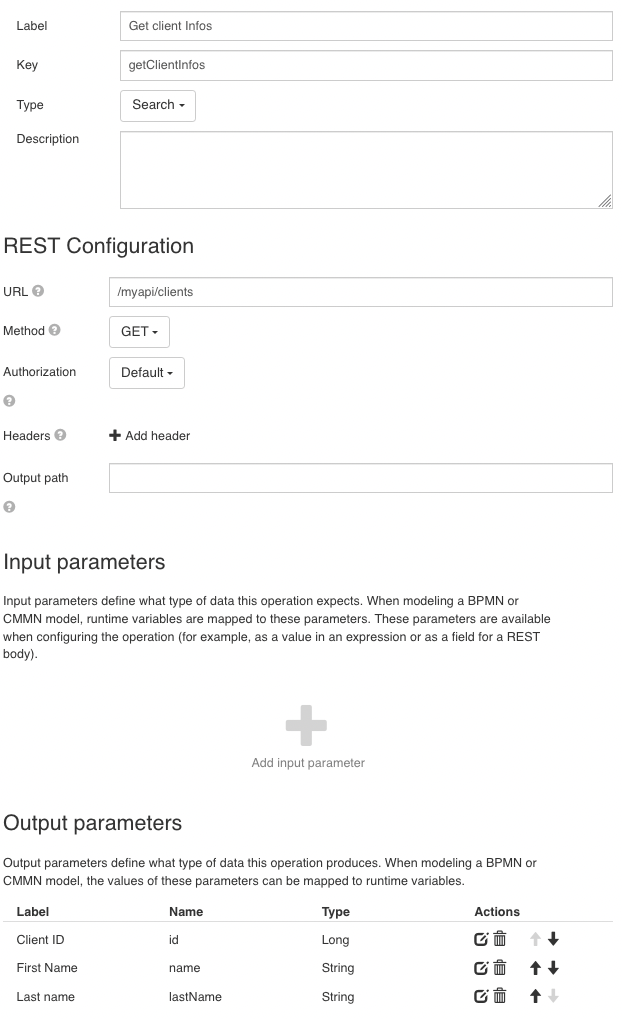 This service can now be used in a process and since the clientList is internally stored as an ArrayNode, it can be used, for example, to configure a user task for multi instance (when executed, it creates three user tasks):

Posting to a Rest Service

Suppose there exists another REST endpoint that allows creating a client object. Adding such an operation is similar to the steps above. First, add a new 'create' operation to the example from above and now:

If the REST endpoint accepts a simple flat JSON structure for creating a client, the operation configuration could, for example, look like: 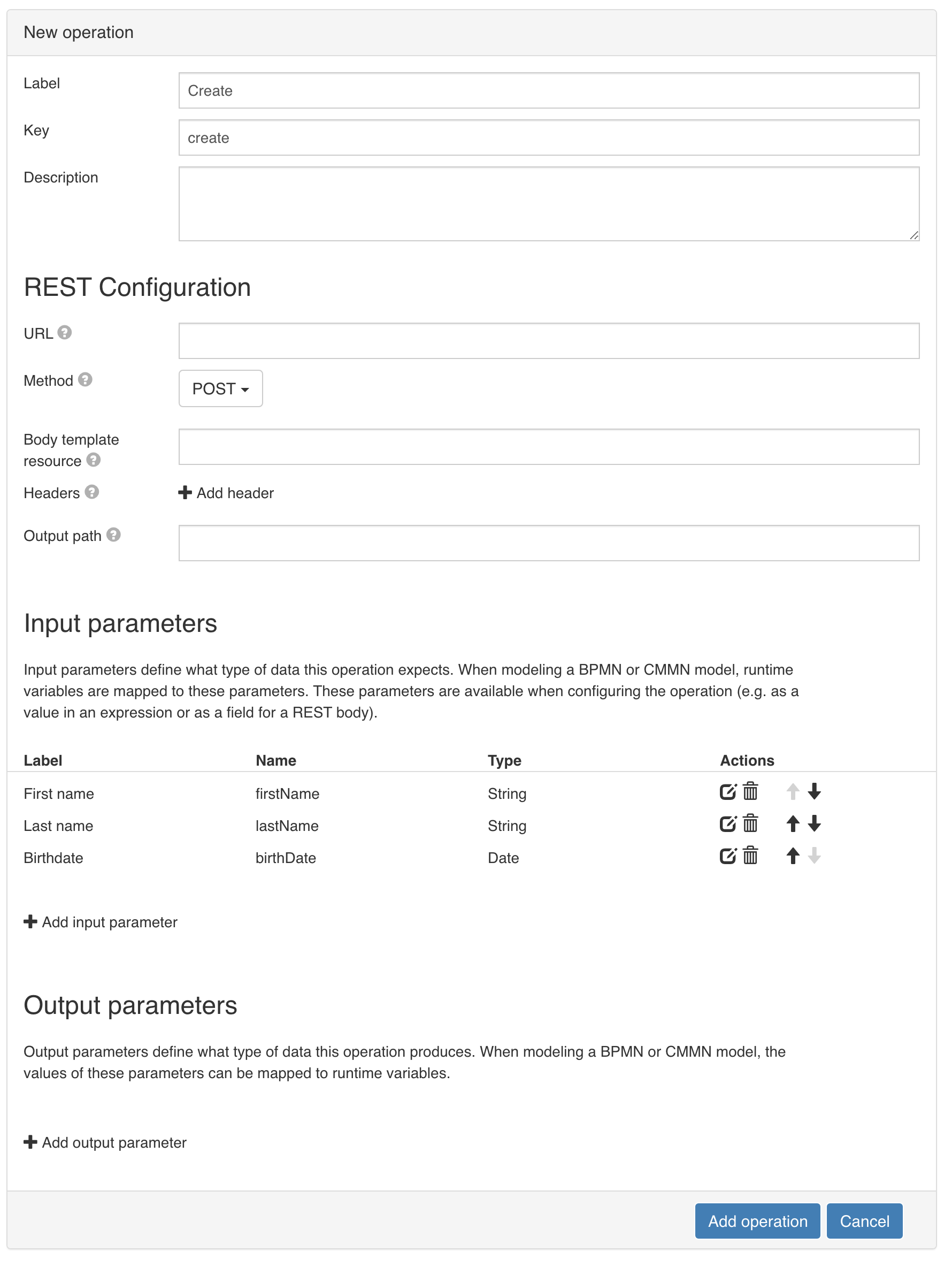